I headed south on Indiana Route 57 with a new perspective. The noise level in the vehicle was more than I was used to. And it wasn’t from the stereo this time.

The view through the windshield was grainier. No amount of washer fluid would remove the bug spatter. Pock marks from salt and sand had literally made an impression on the windscreen. Nothing short of new glass was going to fix this.

Above all—what an appropriate phrase—I could see much farther than ever before from a passenger seat. I was taking my first ride in a big truck.

A person needs a reason to ride in a truck. My reason was “I want to.” Because until now I never had. The driver’s reason was…

Seasonal necessity.
It’s harvest time in southern Indiana. My friend and his brother have finished harvesting corn and are now finishing their soybean harvest.

Collecting soybeans used to be a pretty rough undertaking. Early 1960s-vintage combine harvesters were open-cab affairs. It was you—the operator—and whatever was in the air.

Let me help you here. What was in the air was heat, or cold. It was intense sunlight, or rain. You probably weren’t harvesting in the rain. Still, you could be caught between farm and field. But mostly it was dust. Lots and lots of dust.

During the harvest any dust that was on the plants gets thrown aloft. When the sickle bar cuts the bean stems, particles created begin blowing around too. As the bean plants hit the auger and are driven into the machinery to be stripped and the beans are separated, all the waste that is churned up has to go somewhere. In an open cab harvester, you’re sitting in the middle of somewhere.

Things have improved. It’s still not the sort of fun you’d look forward to when you’re ready to relax, but it’s better. For one, you’re enclosed. You sit in a glass box. Tempered, tinted glass separates you from most of the dust. Climate control keeps you from resembling a rotisserie chicken by the end of the day. That’s right. This ride is air conditioned. It has a radio. It has gauges galore relaying all kinds of data about ground covered, yield per acre, average yield per field, and more things than I can remember.

Amounting to a hill of beans
You may have heard that something “don’t amount to a hill of beans.” Take that with a grain of salt. A kid named Jack had only five beans and did great things. Closer to home, the price per bushel for soybeans is anywhere from $9.25 - $9.47 today. Very roughly, that is $10 for every 60 pounds of beans. Take a trip with me.

Circling the field
We are climbing the non-skid metal ladder leading to the cab of this combine. Your tour guide will be Mark. He’s been at this a while. What we’re going to do, once you reach behind you and close that door, is take a trip around the field.

Mark puts the machine in gear and we begin to move around the field. A combine is a little factory on wheels. When it is finished, you’ll have a large container, or hopper, full of shelled beans and not much else. Look just in front of us. The head, or the removable piece that goes at the very front of the combine is an impressive conglomeration of moving parts.

The head we use to harvest beans has several rows of tines set on bars attached to rotating wheels. As the combine moves forward, job one of the bars and tines is to grab and hold the bean stems and pull them into the sickle bar. The sickle bar neatly cuts them near their bases. Job two of the bars and tines is to sweep the plant cuttings further into the combine head, where the blades of an auger will move them toward a central throat. At that point, serrated bars mounted on chains pull the stems and the attached pods into the harvester.

Inside the machine is where the magic is. It must be. I couldn’t see into the machine, but the beans then mysteriously appear in the hopper like thousands upon thousands of tiny, golden brown gumballs.

The rest of the plant is chewed up and spat out the back where two spinning plates with blades distribute it onto the freshly cut stubble.

This is interesting but has nothing to do with a truck ride, does it? File it away. Someday you may need to explain to somebody where their food comes from.

Offloading
Speaking of trucks, there’s one with a grain trailer conveniently pulled just off the road at the edge of this field. We’ve gone around this field a couple of times. The combine lurches now and again where the ground is uneven. Sensors in the head, which is 30 feet across, allow it to tilt to compensate for the unevenness and most of the beans are cut off at pretty much the same height.

If you look in the convex mirror attached to the door, you’ll see a window built into the hopper. It lets you see how full the hopper is. Pretty full, as a matter of fact. So Mark is pulling up alongside the grain trailer.

He throws a lever and a long, tubular arm moves out until it is perpendicular to the combine. Don’t open the door. Beans are moving through that tube and falling into the empty bin of the truck. If you open that door while all the dust is kicking up, we’ll have tossed away 50 years of progress in creature comforts. Let’s let it settle first. 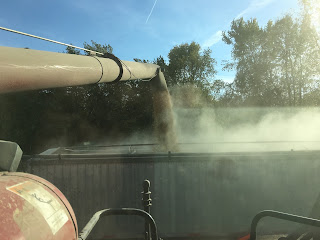 Pulling out
We climb down the ladder of the combine, walk a few feet, then open the passenger door, grab a handle, and climb into the semi. 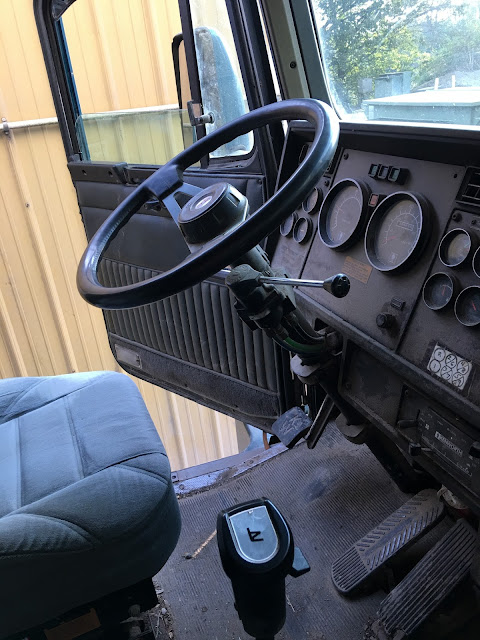 Understand where you are. You are perched on the spring-loaded passenger seat of a 1991 Kenworth semi with an extended sleeper cab. If that sleeper cab is used at all, it’s when the truck arrives before a market opens or the combine needs to make another round and whoever is driving the truck can grab a quick nap before getting on the road. Not often.

Everything you need to know about this vehicle is on the license tag. “Farm…Semi-trailer 78,000+”

This is not Burt Reynolds or Jerry Reed in a swanky rig bootlegging Coors beer from Colorado to Georgia. (My apology if time has rendered that cultural reference pointless.) No, this is a farm truck. It moves grain from its point of collection or point of storage to a market. Today, that market is Newburgh, Indiana.

Your tour guide here will be Tony. He’s been at this a while, too. 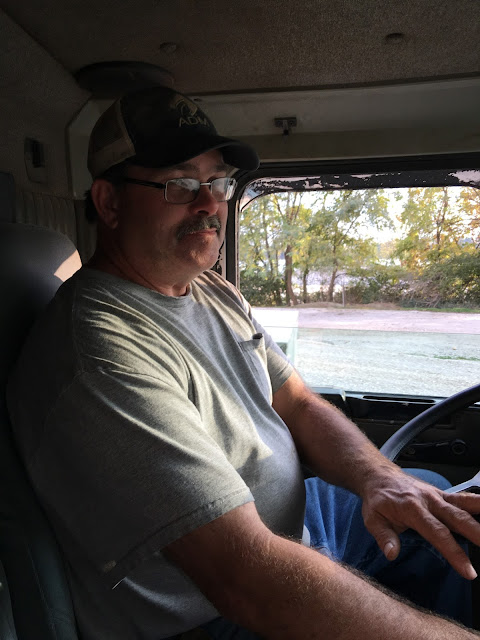 Swinging wide
We start slowly. It’s not a matter of caution. It’s a matter of inertia. We are moving 80,000 pounds of truck and load from a dead stop. It takes a while to get things going.

Point of information. It takes a while to start, and the reverse is true as well. If you find yourself pulling in front of a truck and suddenly applying your brakes, be prayed up or paid up. You’re probably about to have a Zen moment with something bigger than you are.

If you think Tony is spending too much time in the oncoming lane as we navigate the back roads, it’s OK. I did too. Realize that if he didn’t, our load would end up in the ditch. Trucks have to swing particularly wide to negotiate right-hand turns.

Your next impression is th-th-that y-y-you d-d-didn’t think it would f-f-feel quite like this. Aha. You have discovered that the passenger seat is not air-cushioned like the driver’s seat. Well, hang onto your dentures. We’ve got less than an hour to make Newburgh before they close. And by the way, smooth is for sissies.

There isn’t much traffic once we get on Interstate 69. It stays sparse until we approach the intersection with Interstate 64. Then, more traffic joins us heading south. Some people understand. They don’t tailgate. They stay out of the blind spots alongside the trailer and right beside the cab. They don’t dart in front of us. They give us room to change lanes when there is a vehicle on the shoulder. It was a good trip.

We leave the Interstate and travel along a secondary road until we get to our destination. Archer Daniels Midland (ADM) offers farmers several options for grain marketing. At their site, most of the area is covered with gravel. We check in at the gate, where they pull a sample of the grain we are carrying. Then we drive onto a scale. 84,637 pounds. Once our loaded weight is established, we pull forward to the unloading area.

A man with a hand radio, wearing a DayGlo yellow hoodie, dusty denim jeans, steel-toed boots, and a hardhat, squeezes against the wall as we slowly pull past. When the discharge doors are directly over the grates in the concrete floor, we stop. The attendant starts the flow from the trailers. Much faster than you’d expect, both bins of the grain trailer are empty.

We pull away as our load is moved into one of the large storage bins nearby. We have elected a Delayed Pay. They will charge us a set amount each month for storage until we tell them to sell the grain we’ve delivered. When we sell, it will be for the current market price at that day.

To confirm the amount we’ve offloaded, we drive onto a scale again and establish our empty weight. Now we know the weight of the grain, and roughly how many bushels that was.

Our last trip while we are on site here is to drive through a tire wash. Once that’s done, we turn left onto the highway and make our way back to the north-bound lanes of Interstate 69.

It’s different pulling an empty trailer. As Tony said, “It’s like taking the dog for a walk.” No big deal, comparatively. We can start and stop more quickly. The weight of the load doesn’t muscle us around.

Tony moves through the nine gears as we get up to speed and it’s smooth sailing all the way home.

Technology
After we weighed out, Tony had to pull off to one side, get out of the truck, and go into the office to collect a sheet of paper. He marked in ink at the bottom of the paper which fields the load had come from. That will give him an idea of individual yields as well as the combined average yield of all the fields he and Mark farm.

Next year, it will be even easier. All the people who regularly use ADM will get radio frequency identification (RFID) cards they can hold up to a reader. The cards will let the office personnel know who the customer is. It will automatically display their account information in the office and assign the payload to the correct customer.

Today, there can be a heavy flow of truck traffic through the facility. All the information is scanned manually, pulling a number from the truck and hoping they haven’t gotten things out of order. Truthfully, that only happens occasionally. With this new technology, it should happen even less often and recordkeeping should become more streamlined.

When we get back, Tony drops us off at home. His day isn’t over. As long as the weather holds, Mark will continue operating the combine into the dark hours. They will load this and a second semi-trailer, then cover the loads with tarps for transport to Newburgh again as soon as ADM opens. It’s a time of long hours to bring in the crops that will finance seed and chemicals for next year and tide several families over the winter until they can begin it all again.

Two firsts. One day. A combine and a truck. And some lessons in the business of agriculture.
Posted by David Colbert at 5:33 PM